Recruitment vs. Organising: What’s the difference?

Recruitment vs. Organising: What’s the difference? Recruitment and organising are vitally important to trade unions. The two processes are related but quite different.

Recruitment is the promise of being part of something greater than oneself. Organising is delivering on that promise. It is an ongoing conversation among workers and between workers and their elected representatives.

Communication is central to recruitment and organising.

By describing what a worker is likely to think about (the head), feel (the heart) and do (the feet), we can distinguish between recruitment and organising:

A worker that has been recruited

• Understands what the union is able to offer her

• Understands what her rights and responsibilities are as a union member

• Has shared her fears, needs and aspirations with the union

• Feels valued as a person and worker

• Feels she has been giving the opportunity to exercise choice

• Feels that she will be able to learn and grow

• Is willing to participate in democratic processes

• Is willing to articulate her needs

• Is willing to support fellow workers

• Is willing to contribute financially to sustain the union

A worker that has been organised into a trade union

A worker that has been organised into a trade union

• Know her rights and the responsibilities of the employer

• Knows the contents of the most recent collective agreement

• Knows the power and responsibility of the trade union

• Feels a sense of belonging

• Feels protected from being exploited by the employer

• Feels confident to engage in discussion

• Feels part of a collective voice

• Initiates discussions when necessary with the union 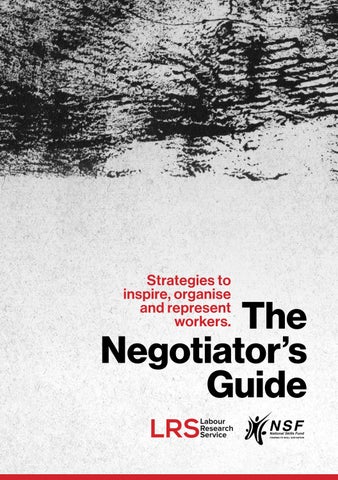 What have we learned about trade union organising in changing workplaces?